Back to front and beyond
New paintings by Varda Caivano

In her second show at Mendes Wood DM, Argentinian-Italian artist Varda Caivano brings together new paintings that were all produced in 2022. Some of them saw the light of day in Mexico during the summer. Others, slightly larger in scale, were made in Madrid. Together they attest to Caivano’s growing reputation as ‘one of the best painters of any age, anywhere today’ (Barry Schwabsky in ArtForum, 2011).

The works made in Mexico are the result of a peculiar way of working which is unique to the artist: they are painted back to front. This is how it goes. Sitting on her knees, Caivano starts painting on a piece of unprimed linen or rough jute that is laid out in front of her on the studio floor. The paint is applied with a brush or a rag or sprayed upon the surface. As the paint is wet and liquid, most of it is absorbed by the linen and seeps through the fabric. Then, at one point, the artist decides to turn over the linen and to continue working on the flipside which then becomes the front. With charcoal lines she maps the stains that are shifting contours as the paint dries. The artist has gone fishing, so to speak. Fishing for distinctive shapes and rhythmical patterns in murky waters. Swirls and curls come into play, new layers of colors are added, exploratory contours indicate possible edges of the painting. Gradually, out of this formless myriad of specs and patches, a new image originates. An image never seen before. An image that was always there.

Caivano is a marvelous colorist. In response to the fierce sunlight in Mexico and Spain, her paintings glow with golden browns and emerald greens. Together with a sun scorched yellow and a striking cobalt blue they add up to a bright and silvery pallet. Metallic paints are part of it, changing the reflection of light with every move of the eye. The ever-changing optical effects make parts of the image come forward and recede alternately. Strangely enough, these tacky hues of copper, gold and silver look natural rather than industrial, like the glimmering scales of pink salmon or blue mackerel. Each of the works seems vibrant with life, recalling the atmospheric sensuality of Pierre Bonnard.

Like Bonnard, Caivano works on numerous unstretched sheets of linen simultaneously. In this way, she can more freely determine the outlines of her compositions and their final dimensions. When completed, the painting, with its rough and ragged edges, is stitched upon stretched linen, leaving a margin of two to four centimeters. The wrinkled, parchment-like materiality of the paintwork remains intact.

The relation of the painted image to its supporting surface and its irregular edges is as complex as it is capricious. In some works, the image extends towards all sides. In others, an unworked area surrounds it. This no man’s land of uncertain status is without doubt a constitutive part of the picture, but it also functions as a permeable membrane, where the realm of painting seems to interconnect with the world at large. Typically, all Caivano’s paintings lack a fixed circumference, a definite framework. Each one of them is permanently negotiating a possible relation towards its very own limits – which lends the works their unruly and independent character.

The painting process may start from vague memories of things seen or situations once observed (it doesn’t get any clearer than that), but representation is not the goal. Intentions are transformed in intensities; descriptions make way for suggestions. Caivano’s art evolves like thoughts, without a clear beginning, without a definite end, like a stream of consciousness. The painting process changes direction in unpredictable ways, gets interrupted or accelerated beyond control. It is difficult, if not impossible, to trace which decision led to each new step in the developing process. Cause and effect get mixed up. In the end, each one of these works is the conclusion of a succession of gestures whose purpose remains unspecified – as in life itself, one might add.

Painting is not only una cosa mentale, as Leonardo Da Vinci stated, a conceptual effort, it is also a laborious processing of viscous stuff and liquid mediums, a messy business that makes dirty hands. Painting equals smearing, erasing, mixing, rubbing, wiping, diluting, reworking, and starting all over again. With every action, something changes. With each gesture, something new comes into being. Each step marks a specific moment in a continuous flow of time passing by.

To look at these works is in every aspect the opposite of a quick scan of your phone. The painted image only reveals itself slowly and progressively, as if the eye first has to adjust to it. Gradually, we discern the various moments of its genesis, the hesitation, the rigor, the confusion, the attentiveness, all the successive stages of pictorial articulation. We see how the painting originated, the different strata of its conception; we are granted an exclusive peek into the very interior of the painting (if such a thing exists).

This particular interest in the anatomy of painting goes back to the hours Caivano has spent in the library of the Academy of Rome, studying reproductions and x-ray photographs of masterpieces from Cimabue and other medieval and Renaissance artists. She became fascinated with pentimento, the presence of earlier images, forms, or brushstrokes; images that have become visible thanks to the fading of certain types of pigments or with the help of infrared photography. Pentimenti lay bare original parts of the composition that were once removed, adapted, or reworked. During the process of painting, nothing is fixed forever, everything is in perpetual flux. In Caivano’s pictorial practice the endeavors of Jean Fautrier, Max Ernst, Arshile Gorky and other pioneering modernists of the speleologist kind resonate, acknowledged for their profound investigations into the darker origins of painting.

Caivano’s thoughtful and sensitive venture into pure pictorial space is a journey into a world of enchantment, mystery, and phantoms yet to be identified. Like the work of her fellow painters Rezi van Lankveld and Amy Sillman, these paintings seem to exist in a nascent state, a permanent state of becoming. They show us the splendor of potential, the wonderful nucleus of things to come. Like a crescent moon in broad daylight.

Varda Caivano (1971) and Dominic van den Boogerd (1959) met in 2006 as tutors at the internationally acclaimed postgraduate institute De Ateliers in Amsterdam. Painting is one of the central topics in their ongoing studio conversations. 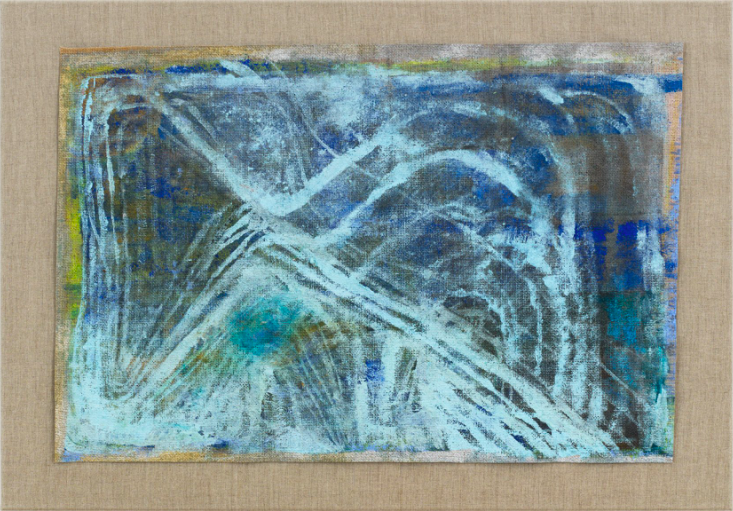