We summon the body to speak. Our ancestral gestures communicate a story of overcoming and resilience in face of the insistence of control. The exhibition The Deviant by Regina Parra promotes the reclaiming of the body and the narratives that surround it. I speak here of a body that is constructed, not biologically given. For many women, the body can be both a territory of identity and empowerment, but also a source of enclosure, often incited by external social factors.

Regina Parra was born and raised in Brazil — a country with a misogynistic and sexist culture, where women are executed daily for being women. In addition to the risk to their lives and the physical violence, the psychological violence – which leaves no marks – hurts the dignity of many of us. In her research for the exhibition The Deviant Regina Parra reveals how the construction of this reality emerged hundreds of years ago, with a project that devalues us, excludes us, and kills us. Parra delves into references that served the construction of Western, patriarchal, colonial, and capitalist identity from ancient Greece to Freud, gradually deconstructing the relations that are imposed in this context.

How we may feel overlaps with how we should feel and, thus, we open gaps, paths, roads to be free. In her notes, the artist mentions: “I hear planets in my ears. I feel rivers in my veins.” These associations between ears and planets, veins and rivers, connect the body with the whole, a body that, before being a social construction, is nature. We are talking about bodies without contours, free, indomitable bodies that celebrate insurgency in the times of yesterday, today and now.

The artist evokes in her works the memory of women and female entities, from Electra to Lilith, from psychiatric patients with hysteria in the 19th century to the song Vaca profana by Caetano Veloso. The paintings The descent, The arch, and The immoderate dance are inspired by the gestures and postures of women diagnosed with hysteria in the photographic archives of Jean-Marie Charcot. The wall temperas are manifestations of the artist’s visual and imaginary memories in the Villa dei Misteri in Pompeii. The performance Electra is named after the homonymous play that narrates the tragedy of Agamemnon’s daughter, in which she murders her mother. The works resume narratives of women who were marginalized, expelled, punished for being said to be impulsive and out of control. We talk about the right to madness, desire, pleasure and intuition.

The exhibition is presented in acts, based on a theatrical narrative, which blurs the separation between the disciplines. Paintings, wall tempera, ceramics, performance, and sounds are seen as equally important and all the pieces are on stage. To create narratives that oscillate between the real and the imagined, the archaeological and the mythical. The artist refers to this choice as “an exercise in political imagination that tries to escape the white cube of the gallery and the black box of the theater, to invent new landscapes and inquire on desires and ways of loving, subtracted centuries ago from millions of women.” The artistic gesture is presented here as something indomitable and untamable, like a woman’s body.

In the same way, the artist constructs partnerships and collaborations to strip herself of the individualistic project, the solitary artist. The encounters are celebrated here as a way to expand knowledge. The ceramics were created in collaboration with Michael Patrick Dudding, in Virginia, USA. While the performance “Electra” is a co-creation of the artist with the North American composer Ian Gottlieb, the Brazilian performers Luisa Alcantara and Stephanie Lucchese, and the costume designer Marina Dalgalarrondo.

Upon entering the exhibition space, we come across the first act, Fire runs under the skin made up of three paintings: The priestess, The sinful, The offering. They are works of an erotic nature, which refer us to ideas of repulsion, death, abjection, and monstrosity. French philosopher Georges Bataille in “Erotism: Death and Sensuality” bridges the worlds of sex and death, emphasizing the fundamental contradictions of existence, where sexual desire and mortal aspects are always accompanied by social taboos. Regina makes “still life” compositions that ignite these ambiguous sensations between pleasure and pain, beauty and putrefaction. The artist refers to this space as an environment of free desire: “A compliment to the body and eroticism as resistance and re-appropriation of oneself. Desire here is seen as essential to the women’s liberation movement. We desire in order to survive.”

The second act, entitled Sinner: for them, I am a violation, is composed of ceramic pieces, a new artistic experience for Regina. The pieces refer to minotauras, or “unholy cows”, mythical beings that gush milk, gush wine, and emanate the freedom of their bodies with pleasure. They are forces that inspire admiration and repulsion, desire and fear, as has been happening anciently with women, their powers and their blood. Sculpture, here, is a rite, an object of worship, materializing ritualization as resistance.

The third act,  We who keep the scream as an inviolable secret, is presented by the performance “Electra”, already mentioned above, as a collective construction. The sound of the action was developed based on excerpts from the book of Electra in which the character emanates unidentifiable sounds, murmurs and cries: “OIMOI”, “E E AIAI”, “PHEU”, are some examples. This unique sound, of a woman not understood, can be translated in several ways. The Italian author Silvia Federici in her book on feminist theory “Caliban and the Witch: Women, the Body and Primitive Accumulation”, tells us about the idea of ​​“making the body speak” and “regaining possession of the body” as acts of resistance, so that from rituals, songs, our own connection with the feminine, we can understand the relationship of patriarchy and machismo with colonization and capitalism. These “Electra” laments are also cries of liberation, of a body that does not move solely because of reason.

The fourth act, Take me! Somewhere ruled by the law of desire, leads us to a detailed painting exercise characteristic of Regina’s practice, in which four large paintings are made from the archive of psychiatric patients at the Salpêtriére hospital. The body, here, speaks again in a sensual and at the same time maddening way, affirming the freedom of non-procreative sexuality and consenting to new gestures and positions taken up by the woman’s body. We cannot identify in these works a face or an identity, also a resistance to the imposition of beauty as a condition of social acceptance.

The concept of female creation, speech and writing was developed in the West by feminist thinkers such as Hélène Cixous and Luce Irigaray in the sixties and seventies. This project of re-elaboration of the structures that belong to us begins with the argument that the language of Western philosophy, literature, and psychoanalysis are necessarily phallocentric. In Irigaray’s words, the issue at stake in the practice of women’s writing “is not one of elaborating a new theory of which women would be the subject of the object, but of jamming the theoretical machinery itself, of suspending its pretension to the production of a truth and of a meaning that are excessively univocal.”

Throughout the four acts, distributed in two exhibition rooms, we are undoing ourselves of the term “woman” as it was constituted and opening space for new ways of understanding ourselves in the world. Is our desire free or constrained? How to design a place in which it is possible for the feminine to inhabit? How to open space and invent the unexpected, the territory of the future that is pure power and openness? These are questions that affected and informed the artist’s research for the construction of this exhibition.

Any attempt to define this practice, or exhibition, as a characteristic production of the feminine is an impossible feat, since this designation of “feminine” resists solidification into a definable form. Here, we propose a re-enchantment of the world, paying attention to the most obvious and pleasant fact that we are nature, that we emanate desire and we can recognize what capitalism has separated, broken and shattered. Instituting, thus, a sense of completeness in our lives. 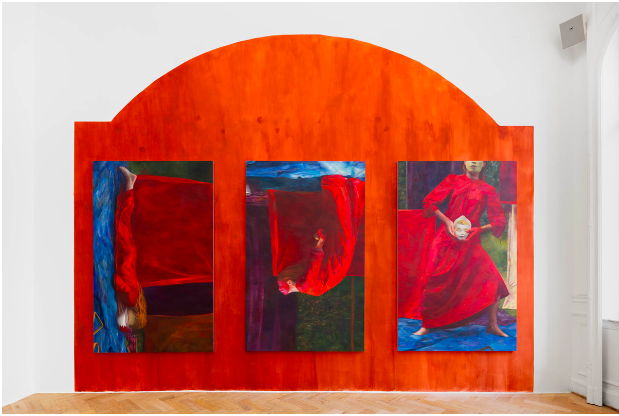