Sheida Soleimani’s work regularly examines the history of the petroleum trade and warfare tied to oil extraction. Her series Qatar 2022 adds spilled milk to the greased tracks. While extraordinarily wealthy because of its oil and gas reserves, Qatar imports most of its food from neighbors, like the UAE and Saudi Arabia. Or at least it did, until its only land border was closed in 2017 and a country that had imported 80% of its milk, bought 4000 cows from Australia, got the US to put them on airplanes and within a few years was able to produce two times more milk than its citizens could drink. Qatar currently produces over 320 tons of milk per day. Beyond self-sufficient, they already export milk to other countries including Afghanistan, Yemen and Oman. If this seems strange, it’s perhaps no stranger than playing a World Cup in the desert or a global spectacle built on sportsmanship hosted amongst accusations of bribery, corruption and human rights violations. Once again, what is potentially read as surrealism in Soleimani’s work, is rather a fitting pictorial vocabulary to represent the absurdities inherent to political reality as source imagery from the host nation becomes a stage where a women’s naked body bleeds into the green grass, milk is spilled and missiles become part of the playing field. As with her series Medium of Exchange, Qatar 2022 borrows from fashion photography, food photography, and queer portraiture, which becomes a language of both empowerment and critique in regard to a country where homosexuality is illegal.

Also on view, her series Levers of Power catches politicians in the very act, examining a fundamental, if overlooked, element of the political gesture. For Soleimani, bodily comportment opens up a gap between what politicians say and what they do. This attention opens a window into the political unconscious—into the way that the present imposes itself on a body. At the same time, her photographs reveal how politicians have trained their bodies to set media machines into spin cycles as endless means of distraction. Headless leaders freeze fingers in the act of pointing, an ekphrasis that invites viewers to pause and meditate on these acts of blame shifting, the very embodiments of power, corruption, and lies. The source imagery used as backdrops tell a radically different story, commanding us to link the crisis and devastation to the microlevel of the political gesture. In these photographs the aesthetic rendition of affective experience provides evidence of historical processes. The type of processes that lead to flying cows, World Cups in the desert and vulnerable citizens face down in the turf. 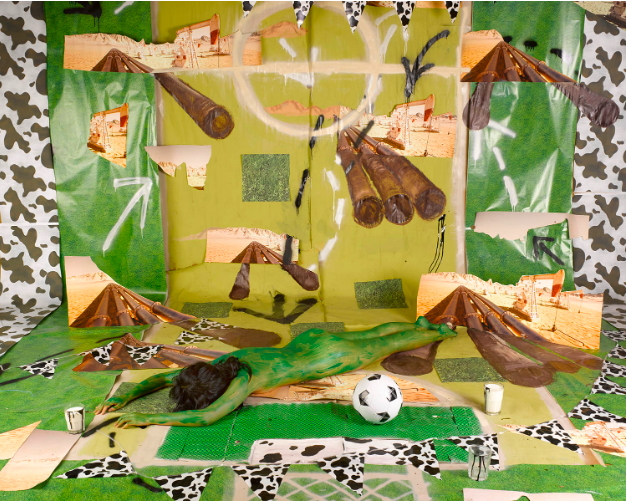