Now I will tell you a story. I hope it will be good company for what you are about to see, but before that, I want you to take a moment to consider something. Before moving forward, consider what you actually understand as “a body”. Most of us take for granted that the human body is a stable, self-enclosed entity. The individual, like linear time, gender, race, or even perspective, is often perceived as a godsent irrevocable idea when all these things are, in fact, contextual assumptions and relatively new social constructs. Since the Enlightenment, the definition of humanity has relied on excluding anything deemed to be nonhuman: plants, animals, and inanimate objects. Not to mention, for instance, people who are not white or male, people who lack money or land, or those who live according to different logics.

The story I am about to tell started around 3.5 billion years ago when stromatolites – also known as layered rocks – dominated shores around the world and reigned as the first form of life visible to the naked eye on Earth. These creatures were formed in shallow waters when biofilms of living microorganisms, such as cyanobacteria, trap sediment. These formations’ delicate, wavy forms were actually “sculpted” by moving microorganisms. The stromatolites’ place in the ecosystem went unchallenged for two billion years. But around a billion years ago, the layered rocks abruptly disappeared from the fossil record. Researchers say the extinction is no less dramatic than that of the dinosaurs, yet, until very recently, no one knew what happened to the stromatolites.(1) With a less visible footprint on the planet – and less appealing for a Hollywood screenplay –these rocks apparently underwent a silent mutation.

Through genetic sequencing and lab simulations, scientists drew a connection between stromatolites and another peculiar, clumsier, rock-like living structure that gradually turned up: thrombolites. After a few months in a controlled lab environment, our character’s delicate layers turned into odd clotted stones. Scientists then suspected something similar occurred a billion years ago, all over the planet, driving the stromatolites out of existence or turning them into a messy version of their former selves. These formations were one of the earliest examples of the intimate connection between biology—living things—and geology—the structure of the Earth itself. The persisting mystery and the uneventful disappearance – or the transmutation – of stromatolites (isn’t it the same thing?) seemed like a good starting point for discussing Paloma Bosquê’s new sculptures.

We often wonder what something is made of as if this information would generate a safer and “more intelligible” relationship with what we experience. The one who asks – the subject – aims to circumscribe and define the object: what I see is something external to me, made of something identifiable, at times by someone, and with a specific meaning. Paloma Bosquê often hears this as the first question someone asks when looking at her work, especially those made in the past three years. The peculiar materiality of her sculptures and their indefinable forms generate a proactive anxiety: to come across something fully present but which simply cannot be fully addressed with any existing language.

Like our fellow stromatolites, artworks often fall under this kind of scrutiny. Purposefully, I will not place the works you are about to see on a dissecting table. Instead, I will leave them to your own experience, your own senses—matter matters per se. Once we start talking about matter, we distance ourselves from it. Within the space that opens up, a host of immaterial things emerge: language, consciousness, subjectivity, agency, mind, soul, values, meaning, and so on.(2)

Shakespeare’s magician, Prospero(3), famously said: we are such stuff as dreams are made on, and our little life is rounded with a sleep. That said, doesn’t the dream itself prove that what is dreamed must be there in order to provide the dream? It must be there, but where? Can a body dream itself into existence? “Such stuff”, which Prospero refers to – the stuff that binds the visible and the invisible – is what Paloma Bosquê seems to be after. To write about her work is to cope with the unsettling and to experience the limits of language in the flesh.

Bosquê’s work invites touch, or perhaps a “tactile gaze”, that has nothing to do with interactivity. Her sculptures have a haptic condition that is also the grounds to reflect on communality and togetherness from the perspective of what is boundless and impossible to attain. Togetherness is not a harmonious relation of self-enclosed things. Her work is a reminder that no being is intact. Our existence as bodies, human bodies, are merely occurrences, among other things in motion. Jacques Derrida states that the liminality of touch concerns the impossible or possible relations between objects(4). In other words, the concern with touch is equivalent to the concern with the limits of reality and the possibility of grasping it.

You know, one can never really touch anything; at the same time, there is no absolute isolation or disappearance. We live in this flicker. Nothing is really apart or fully in contact, and I feel Bosquê’s work, in general, embodies this aporia. Her eerie nocturnal shapes (bodies, landscapes, specters? it doesn’t matter…) seem to be doing a strange dance of learning how to share common ground: testing each other’s boundaries – and ours – only to discover that they are already adjacent.

Paloma Bosquê’s new exhibition is an “anti-linear” story. In the rooms you are about to enter, there will be neither an “I” that triumphs, nor a generalized universal “we”. Instead, a weave of materials and forms challenge preconceptions of the body and interrogate its limits, particularly in relation to interwoven folds of desire and social markers of gender and sexuality. Hers is a non-conformist tale in which yet-to-be-named characters – or beings – delve beyond the surface of meaning to reconfigure their outlines and celebrate the mysteries and contradictions of shared existence. Those willing to follow a plot will be disappointed. As I said before, my story was meant as good company to hers. This exhibition is, above all, an open invitation to let go of something. To change the lens through which you see before you come into contact with anything which you coexist with. Perhaps it is even a lullaby or, if you may, a moment to give praise to a silent mutation. 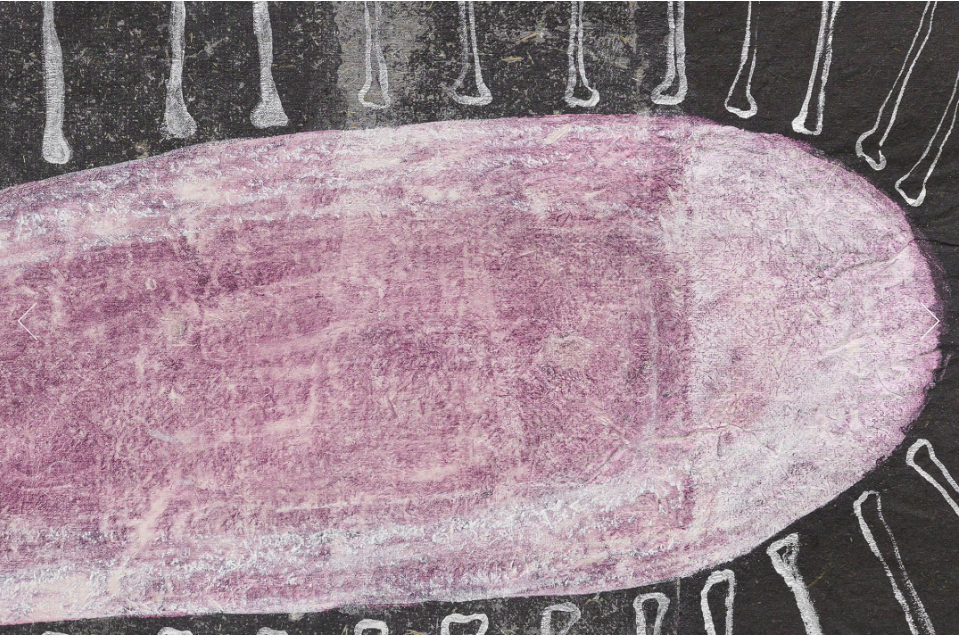