Nino Mier Gallery is thrilled to present A Bit Touched, an exhibition of new works by UK-born and New York-based artist Nicola Tyson. Acrylic on linen paintings, graphite drawings, and acrylic monoprints will span both Brussels galleries from November 18 – December 17, 2022. This is Tyson’s first solo exhibition with the gallery.

The exhibition’s title, A Bit Touched, is a British slang expression for a person who is considered eccentric, unconventional, or lacking good judgment. Tyson wryly considers the phrase to crystallize both the content of her images as well as the process of making this most recent body of work. Continuing her experiments with the boundary between figure and ground, Tyson cultivates in a visual language of undulating, biomorphic forms that are humorous, and ebullient—but also solitary, violent, and abject. In A Bit Touched, Tyson toys with her surfaces and the little “bit touched” figures that emerge within them, figures which are visceral but not quite human, that are singularly dreamlike and beguiling.

Considering the site-specificity of the exhibition – two multistoried galleries with architectural eccentricities rather than large, white cubes – Tyson introduced an element of surprise rather than thematic uniformity within the works. Sometimes this nonconformity is incorporated into the image itself. In Recliner, a comparatively naturalistic small pink bird encounters an unlikely, schematic ‘woman’ reclining in a forest. In Licker, one figure throttles another, whose long tongue shoots out to connect with its aggressor’s nose in an absurd feedback loop witnessed by a passing bird. And in The Field, two birds encounter each other mid-air, observed by a character standing beneath them in the titular field. Tyson notes that “’field,’ in this painting, might reference the field of vision which in the imagination—unlike the rectangle of painting itself—has no limitations.”

The bold acrylics that have always characterized Tyson’s palettes are here focused on fleshy peaches, tans, and browns; blood red; and various shades of cyan. Slender striations of color proliferating across her surfaces resemble the grooves of wood grain and disrupt the sterility of a cleaner color blocking technique. To achieve this, Tyson first lays a solid color down on her canvas, over which she draws an outline in charcoal to be brought to life with additional layers of acrylic paint. The original ground color peaks through each canvas like lacerated skin, forming the ultramarine visible throughout The Field, the pale blue between parted lips in Hug, the red oxide of the hand, eyes, and mouth in Index Finger, and the cadmium red of the eyes in Suspended. In Tyson’s work, eyes are not the gateway to the soul: they are voids which deny the interiority and identity of her figures, offering instead the hypnotic pull of paint’s materiality.

Graphite on paper drawings highlight the poles of disquietude and humor in Tyson’s work. Visual puns form between the drawings and their titles, adding a levity to uncanny, creaturely representations. In Breathwork, for instance, a gaping mouth gasps for air as manifold eyes bulge above. Playfully and disturbingly, the taxing nature of work is reintroduced to what otherwise is now commonly understood to be a central practice of self-care.

Tyson’s images hover between movement and stasis, her compositions vibrating with potential energy that Barry Schwabsky calls “life force itself”. Achieving a palpable physicality with each work is an important tenet of Tyson’s practice.  She describes: “much contemporary painting is cross-checked continually in its making with its digital version on screen (a kind of mid-production post-production process), in order that the final painting looks good—it’s best in fact—digitally.” But for the artist, “a painting must have an almost sentient presence in the studio, first and foremost […] A painting is a physical, not just a retinal, experience and must engage with the viewer, much like a person, in real life. This is its real magic as a medium.”

Nicola Tyson (b. 1960 London, UK; lives and works in New York, NY) attended the Chelsea School of Art, St. Martins School of Art, and Central/St. Martins School of Art in London.  Since, she has had numerous solo shows, including at Sadie Coles HQ, London; Petzel Gallery, New York; the Contemporary Art Museum, St. Louis; Mutual Admiration Society, Chicago; the Cleveland Institute of Art; and Vielmetter, Los Angeles; among many others. Tyson’s work is collected by institutions worldwide, including the Hammer Museum, Los Angeles; the Solomon R. Guggenheim Museum, New York; the Museum of Modern Art, New York; the Tate Gallery, London; the Walker Art Center, Minneapolis; and the Museum of Contemporary Art, Chicago. 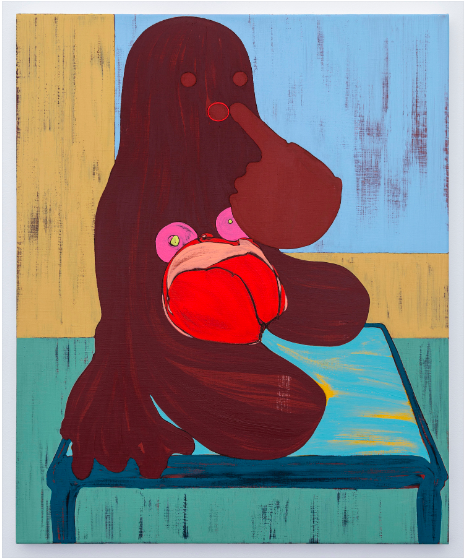