One of Iceland’s leading conceptual artists, Hreinn Friðfinnsson has been celebrated for his lyrical and poetic use of everyday objects. His work investigates our understanding of time and the world around us, underscored by a delicate sense of humour.

Hreinn Frið finnsson is a one-of-a-kind artist. Few in his generation combine conceptual art, lyricism and a love of nature so superbly. Although it may seem a contradiction in terms, since the 1960s, Friðfinnsson has developed a highly personal romantic conceptual art. Throughout his career, he has adopted a formal language that is rich and varied (photos, drawings, sculptures, films), studied the emergence of life on Earth, questioned the physical laws that govern what is real, played with the limits of language and thought, and celebrated the mundane and the everyday with a soft voice full of humour and absurdity. “About the Day and the Ray”, Hreinn Friðfinnsson’s fourth exhibition at the gallery, includes earlier works from the 1970s as well as recent ones.

The room on the right provides a glimpse of his photographic work during the 1970s as in “A Place” and “Mid-Night Jump”. The photographic triptych “Mid-Night Jump” consists of: on the left, the artist standing in 1975; the middle photo, taken in 1976, shows him jumping in mid-air — a moment suspended; the one on the right shows him a few second later, his feet back on the ground and again standing. The diptych “A Place” makes reference to viewpoints, the powers of the imagination and hope. Friðfinnsson has always been fascinated by the invisible and sought to reveal it, to show its wealth and its deficiencies. “Composition with Meteorite” illustrates this in all its inherent tension: attached to the ceiling by coloured wires, magnets are drawn to a meteorite originating in the Campo del Cielo (Argentina) and of two iron minerals from a Swedish mine. They remain suspended in a precarious equilibrium. In a way, the fragility of the installation is accentuated by the attractive force of the meteorite. On the wall, “11 Drops” is also a work of great subtlety which demands our full attention to perceive it. Gravity, and Earth’s continuous movement and rotation, are set in contrast to one another in “Triptych”: two videos and a plumb line that combine straightforward physics (Foucault’s pendulum) and Friðfinnsson’s relentless humour (he films his assistant doing a breakdance figure).

In the room on the left, Friðfinnsson portrays the mystery of the origin of life. Scientists are continually studying Earth’s history and analysing its stored information — geological strata. They particularly examine fossilised remains of complex bacterial colonies known as stromatolites, which bear a remarkable resemblance to present-day living formations. In “By the Ocean”, Friðfinnsson assembles a stromatolite section, two crystal balls, a photo of children by the sea, and hydrogen, oxygen and carbon atoms. Everything required to celebrate a world that lives and mutates. As a conceptual artist, Friðfinnsson is inevitably driven to question painting, albeit obliquely: on one hand, with palettes of monochrome paint (is this a painting or a sculpture?), on the other, in the rear room, with a major installation consisting of dozens of paint-stirring sticks used by a family business in Amsterdam. Installed all-over with mathematical precision to express a dynamism, the sticks originally served to mix colours and obtain specific hues. When you consider Friðfinnsson’s interest in haphazardness, the combinations of colour present on the sticks, which is totally independent of his will or control, could only fill him with enthusiasm. His only intervention is to set up a specific rhythm in order to cover the entire exhibition wall.

In the rear room, several pieces convey the mysterious or even shamanic aspect of his work. One example is the large photo that shows Friðfinnsson receiving colours of light in his hands as if he were taming the light spectrum. A powerful gesture in terms of its simplicity and metaphoric connotations.

Intimately steeped in the folklore, culture and landscapes of Iceland, Friðfinnsson draws on his childhood and memories to populate his work with references to elves, manifestations of living spirits, fates, illusions and the power of dreams. “Green Glass” constitutes a good example of this. Friðfinnsson opens doors. He helps the audience to further, and to complete an open work, such as the superb piece created at the Cirva in Marseilles. A simple gesture: a half vase is placed on a thin sheet of metal, which is polished to such an extent that it becomes a mirror. As a result, the audience sees a whole vase consisting of a half-vase and its reflection. Is it a magical illusion? Is it an invitation to go to the other side of the mirror and be overwhelmed by the immaterial and the ill-defined? To quote Pierre Hadot, ‘in magic, it is a question of teasing out the secrets from nature, discovering the occult processes that make it possible to act on nature so as to place it in the service of humans.’ Friðfinnsson watches and listens. He questions the mystery of the world and shares his discoveries with us in a whisper that is both fragile and distinct. If Friðfinnsson has a message, it is a blank one, as in Encounter. Friðfinnsson is a storyteller; the kind that the world undoubtedly needs. Now and in the future.

Hreinn Friðfinnsson was born in Bær Dölum, Iceland in 1943 and has lived and worked in Amsterdam since 1971. He graduated from the Icelandic College of Arts and Crafts in Reykjavik in 1958 and co-founded the influential Icelandic artist group SÚM in 1969.

In 1993, Friðfinnsson represented Iceland at the Venice Biennale, and in 2000, he received the prestigious Ars Fennica Prize. 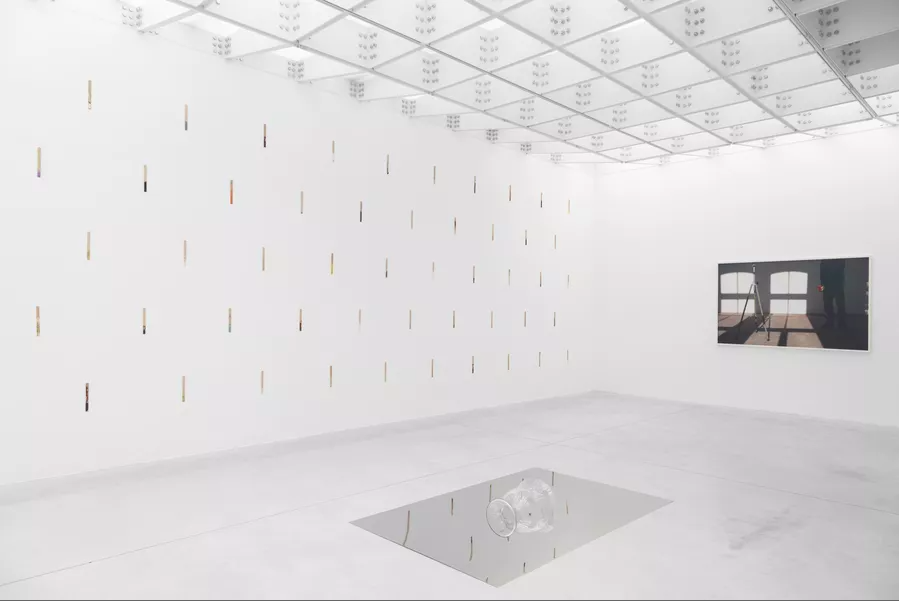