German artist Franz Ackermann is taking over the Galerie Templon’s Brussels space this autumn with a radically new exhibition concept. A travel enthusiast, he created an exhibition that speaks as an ever-evolving version of the project he presented in 2022 in Paris.

For this new stage, he takes the immersive Parisian installation as his starting point, full of colour, sound and light, inspired by image and video archives of his own travels. A shot of an Asian building is mixed with the noise and sequence of a Thai tuk-tuk or the view of an oriental souk. The walls of the Brussels space are now covered with three new large-scale installations, all scheduled to evolve over the course of the exhibition to reflect his future experiences, journeys and encounters. Imbued with fresh energy, the artist is now proposing a palette specific to the Belgian capital, new and explosive, ranging from indigo to canary, carmine to fuchsia.

A handful of monumental paintings unfurl alongside them, sweeping views enveloped in a light spectrum constantly oscillating between black and colour. An artist very much in tune with his era, he reveals a fully transformable experimental game centring on the notion of physical and mental displacement, one of his favourite subjects. And wonders: “In the post-pandemic era, where migration has resumed after a hiatus of nearly two years, how has the notion of travel within each culture been transformed? Has the notion of the inner journey been transformed?”

Born in 1963, Franz Ackermann lives and works in Berlin and Karlsruhe. He has taken part in numerous major group exhibitions over the last 20 years in Europe, the USA and Japan, including: 2018, Kunstmuseum, Bonn, Germany; 2017, Barnes Foundation, Philadelphia, USA; 2016, Pinacoteca de Sao Paolo, Brazil; 2009, Tate Triennial, London, UK; 2009, Dallas Museum of Art, Dallas, USA; 2006, Neue Nationalgalerie, Berlin, Germany; 2005, Whitney Museum of Modern Art, New York, USA; 2005, MoMA, New York, USA; 2005, Mori Art Museum, Tokyo, Japan, and 2003, Venice Biennale, Italy. In France, Franz Ackermann’s work has been seen in 2005 at the Biennale d’Art Contemporain in Lyon and Printemps de Septembre in Toulouse, in 2004 at La Maison Rouge and in 2003 at the Palais de Tokyo, both in Paris. The Staatliche Kunsthalle in Karlsruhe (2014) and Berlinische Galerie in Berlin (2013) recently held major solo exhibitions of his work. And in 2018, as part of the renovation of the Miami Beach Convention Center, Franz Ackermann created About Sand, a remarkable mural for the building’s outer façade. 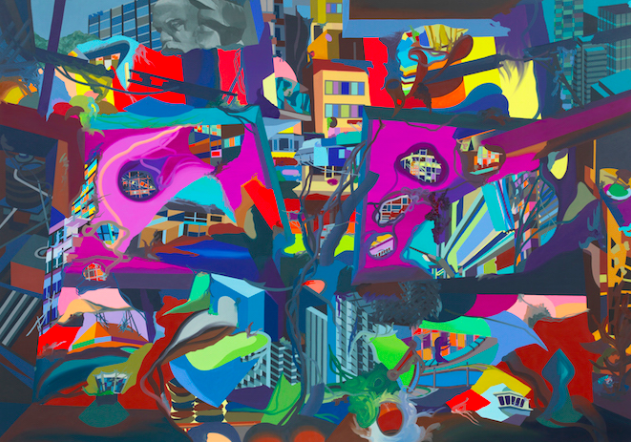