The Bernier/Eliades Gallery is pleased to present the latest solo exhibition of the British artist Charlie Billingham, opening on Thursday 19th of January. The exhibition will feature a series of oil paintings and a printed wall.

Charlie Billingham (b. 1984, London, United Kingdom) graduated from Fine Art and History of Art at The University of Edinburgh and Edinburgh College of Art (2008) and Fine Art at the Royal Academy Schools, London (2013).

To create his paintings, Charlie Billingham uses fragments of imagery from historic British drawings and etchings. His main interest is in the satirical prints of the late eighteenth and early nineteenth centuries, which mostly fall into the late Georgian and Regency eras. Drawing on imagery from the likes of James Gillray, Thomas Rowlandson and George Cruikshank among others, Billingham takes elements and aspects of the original caricatures.

“I first encountered these satirical prints when I was a child,” Billingham says. “My parents had a set of Cruikshank etchings, which were based on the exaggerated fashions of the early 19th century in England. But it wasn’t until I was studying at the Royal Academy Schools in London that I decided to use the imagery in my own art.”

The humor in these images isn’t fixed on any political resonance from the time. “I’m interested in these very politicised images and the way in which the politics becomes obsolete over time. I’m also interested in trying to strip away the politics and just taking physical elements of the prints which distill some of the emotion and intention behind the original drawing.”

Through cropping, manipulating and collaging, he reimagines these caricatures. By doing so he strips away much of the original politics and narratives, creating his own more ambiguous compositions. The figurative is reduced to a more abstract form of narrative. It is interesting that the original works he draws from often explore ideas of greed and excess—something which perhaps rings even truer today. His color palette is often imbued with pastely and saccharine colours. 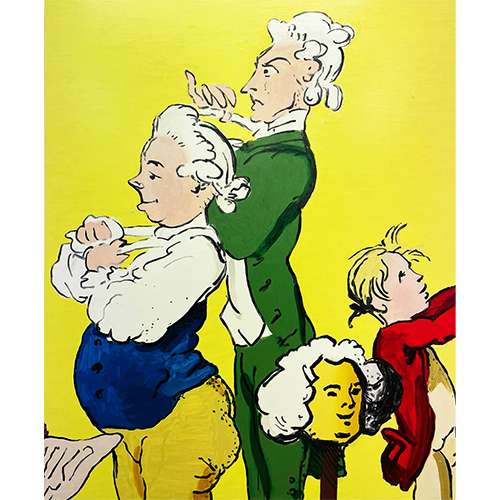