PERCEPTION IS THE MEDIUM

Sampling, the technique of first digitally encoding sound and then layering it in a new composition of music, can be analogized to the drawing process of Brooklin A. Soumahoro. The artist has so far assigned close to a hundred of his favorite pencil colors with unique numbers in his DIY color chart, assembling a repertoire for him to explore color relationships with economic forms, neat surfaces and geometric compositions to activate colors into synchronistic flows, note by note and beat by beat.

In Supernova, Soumahoro’s solo exhibition at rodolphe janssen, every colored drawing begins with him arranging a few color codes into a sequence, which is then translated into an expanded tessellation of short and uniformed hard-edge colored stripes, and followed by him meticulously applying back & forth pencil strokes to layer and burnish each stripe until no paper tooth shows through the color. The soft wax-based pencil, when pressed hard into the paper layer after layer, builds up a smooth, creamy, rich and vibrant surface that serenades our eyes with melody and rhythm.

All the colored drawings included in the show are in two compositions formed with repeated seamless chevron pattern, zigzagging from top to bottom. The width of the chevron is equivalent to that of a lightning bolt and defined by one particular color but of two alternating values or tones. In one composition, all bands are in one synchronized position. The other composition, such as in “Untitled, (R.M.LF.ORN.1.22)” — resembling a stack of multiple diamond-shaped neon-light tunnels that radiate infinite rays from the central axis to the left and the right, instantly animating the pictorial plane into a nearly psychedelic space, forging unexpected dynamics that signify a restless analytical mind sorting itself out and organizing its energies in bands and colors. Frank Stella once declared, “…that the colors move, that they follow the bands, that they have a sense of direction. And it’s the directional sense of the color…that holds the surface of the painting.”

The series of colored drawings is entitled Lightning Field Drawings, alluding to Walter De Maria’s legendary installation The Lightning Field (1977), which conceptually began with a drawing. The word “field” suggests a space or a landscape. In De Maria’s work, it indeed refers to an actual place in New Mexico for observing lightning. In Soumahoro’s drawings, however, instead of a physical space, it implies the electrifying colored surface that awaits the viewer to find and lose a sense of symmetry and order in the shifting perception. As the eye tries to reconcile various color-effects in the tight arrangement, the vision can suddenly produce an afterimage at a blink: a flash of the perceptual effect that is caused by the interaction of colors.

It is clear that color relationships constitute the foundation of Soumahoro’s drawings. His engagement with the color, however, is not informed by the color theory but developed according to his intuition and empirical analyses. At the heart of his practice is the artist’s profound interest in how capable we are of looking, and how our visual perception can affect our viewing experience cognitively and emotionally. As Bridget Riley argues, “Perception is the medium, through which states of being are directly experienced … Repetition, contrast, calculated reversal and counterpoint also parallel the basis of our emotional structure.”

What is worth noting is that the razor-sharp contour of each band and the saturated and even surface are not produced by using masking tapes or mechanical devices, but simply by the artist’s hand. The secret is revealed in the margin that separates the end of drawing from the edges of the paper: jagged pencil strokes and penciled numbers for assigning colors are clustered into a fuzzy constellation.

Also included in the show are a few thoroughly burnished drawings—made of charcoal, pencil and graphite—that can be easily mistaken for black and white woodcut prints or lithographs. But in fact, the thin, sharp white lines that form the grid and the seamless chevron pattern or simply resemble scratches are not caused by engraving on the wood or metal plates; instead, they are created with direct indentations on the surfaces of paper prior to applying the drawing material over them by hand, which is not conspicuous even upon closer inspection.

In a time when figurative painting is in vogue, Soumahoro employs unmixed and commercially available pencil colors, the systematic approach and the geometric design to search for his own optical style, while revisiting moments in art history when artists turned their backs on the more painterly and gestural forms by emphasizing two-dimensionality and allowing the viewer an immediate visual response. As we fall under the spell of Soumahoro’s dynamic drawings, we cannot help but wonder what the destiny is for paintings and drawings in the 21st century. 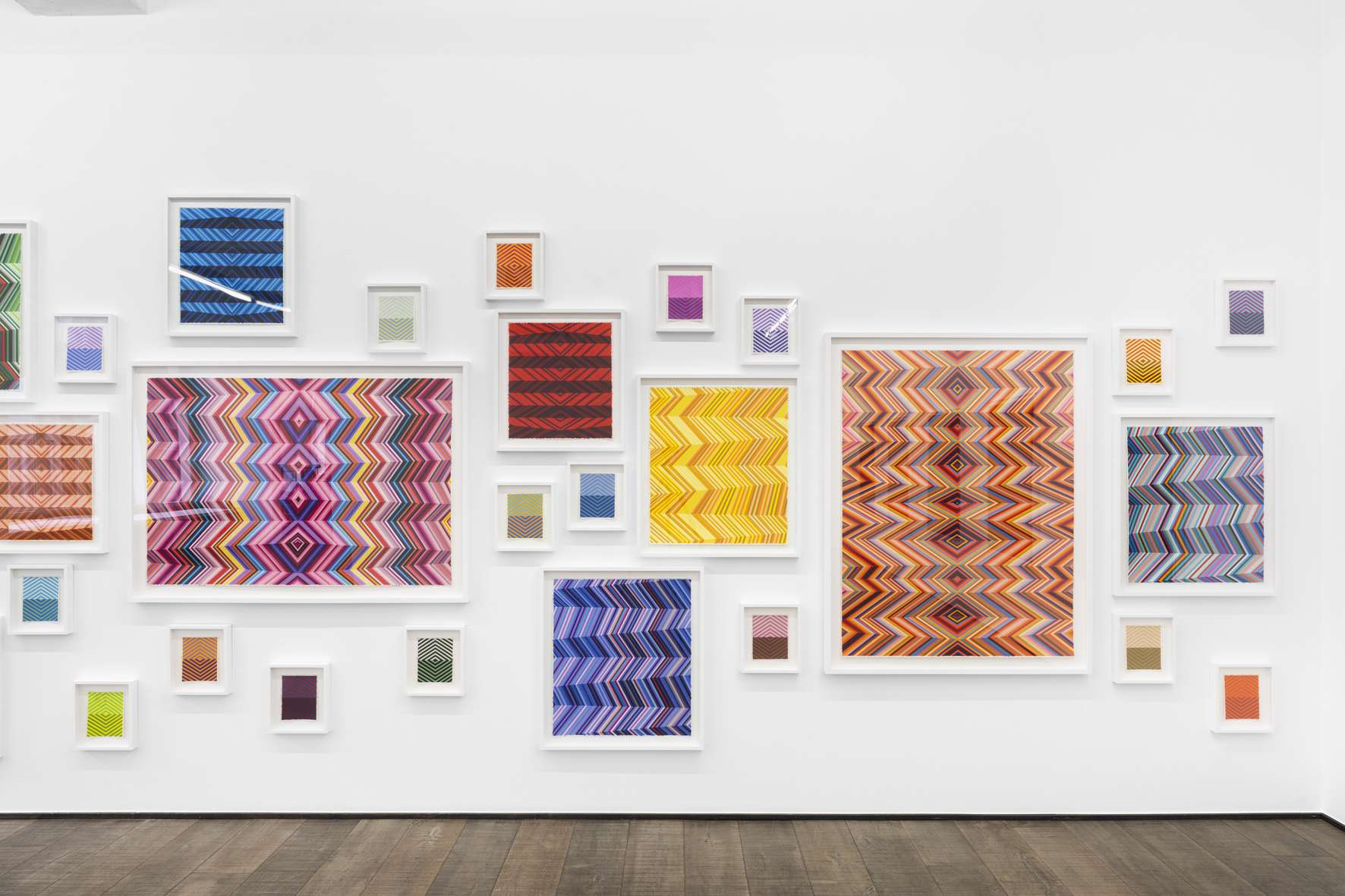